Changes Brought On By A Trip of Japan, Trip to a Controversial Museum

I’ve never been the sort of person who usually thinks about World War II. I don’t watch the History channel, I don’t read books about the war, and I’ve never taken an interest in visiting World War II battle sites, even when I lived close to those in Eastern Europe.

Yet when I realized earlier this winter that my first trip to Asia would place me in Tokyo on Pearl Harbor Day, I thought it would be informative to see what was happening that day in Japan.

Due to my western naiveté, I assumed that, in Japan, the Pacific War started on December 7, just as it did in the US. However, due to the international dateline, the war is generally regarded as having stared on Dec 8, the date when the Emperor of Japan issued a declaration of war against the US.

I also found out that, despite my best research, there really wasn’t much to see on Pearl Harbor Day in Japan. As the helpful concierge at the Sheraton where I was staying softly said (while physically drawing back from me), “No one wants to remember those times. They were terrible.” My new American expat acquaintances who live in Japan told me that most of the public discussion and commemoration of the Second World War comes in August, with the anniversary of the bombings of Nagasaki and Hiroshima.

Yet, on my way to discover that there was no story about Pearl Harbor Day in Japan, I ended up drastically changing the way that I think about that country.

On December 7, in search of a story—any story– I went to Yaskuni Shrine of the war dead, and the associated Yushukan war museum, a museum which I had read was highly controversial. What I didn’t expect was that it would be personally distressing.

While walking thru the museum, I was surprised to find myself upset at seeing a Zero fighter prominently displayed in the museum’s foyer. As I walked through the exhibits at the museum, it was troubling for me to read about the Allied bombing raids bring described as “Attacks on the Japanese homeland.” Seeing the preserved Japanese kamikaze torpedo’s, preserved kamikaze planes and personal relics of the kamikaze crew (a.k.a. the “Special Attack Corps”) while reading about people who “tried to defend Japan with their own bodies” was possibly the most emotional I’ve ever been in a museum—and I’m not known for my light taste in travel entertainment.

Forcing myself to go back to the Yaskuni Shrine shrine on December 8, in search of a story, all I found a few WWII veterans posing at the shrine, a few Japanese servicemen, one lone protester, and a few more schoolchildren. If I hadn’t been there the day before, I wouldn’t have known it was anymore crowded than normal. Yet, being there gave me a lot to think about.

Weeks later, in another Tokyo museum, I saw hunks of molten metal that had fused when Americans bombed the city in the spring of 1945. I even read that American bomber crews could read their watches at 29,000 feet by the light of the flames from a burning Tokyo. Those images stuck with me, and have changed the way I view Japan.

Growing up in the 1970’s, I always associated the word “Japan” with the phrase “made in”—because that was the place where toys were produced. As I’ve gotten older, I’ve come to appreciate Japan as the place that brings us manga (comics), anime, and sushi. It’s also a place that provides the fun oddities of Japanese film that play Fantastic Fest, and the fun Japanese bands that play SXSW’s Japanese showcase. Before going to Japan, and thinking about the war, I always associated Japan with the culture of “kawaii” or “cute.”

Yet, going in search of a story that didn’t exist, I accidentally changed myself.

Riding the excellent Tokyo Metro across the vast, sprawling neon-lit city, I was struck by two thoughts. One thought was that the hyper-modern city of Tokyo likely wouldn’t exist without the devastation it experienced during the war. The second was the idea that flitted through my head every time I saw an elderly person whom I took to be Japanese. The idea that ran through my head again and again, as I popped up to offer them the use of my subway seat, was the thought that they must have suffered terribly during the war.

Part of this thinking could have been brought on my a film I watched years before going to Japan. Isao Takahata’s animated film “Grave of the Fireflies” is based on the true story of an orphaned brother and sister who suffer greatly during the war, including the dramatic end of the film where the sister starves to death. It’s not exactly an animated film like the ones from Disney, yet the Studio Ghibli film is so well regarded in Japan that several live-action remakes have been made.

I wasn’t intending to have a quasi-scientific “control” for my first trip to Japan, I accidentally ended up with one. The very first day I arrived in Japan, my oldest childhood friend and I went to the Roppongi Hills observation deck in the Mori Tower, a new building in a nice area of Tokyo where you can see a panorama of the city. When I was there, all I could do was gaze in amazement at the lights. (Tokyo is so hyper-modern it makes Austin look like Fredericksburg, or maybe makes Manhattan look like Amarillo.)

Yet, going back to that same overlook with my husband at the end of my trip, all I could do was wonder how close was I –at the 53rd story, to the height where the low-flying American bombers had dropped the bombs on the city. I wondered how much of what I could see from the tower had been on fire during the bombing raids. (An estimated 16 square miles of Central Tokyo was consumed by fire following one Allied bombing raid in March of 1945.)

I’m very curious to see if my spending a few weeks in Japan—and doing a great deal of thinking about the devastation wrought by the Second World War– will change the way I approach Japanese pop culture in the future.

Some pictures from the shrine: 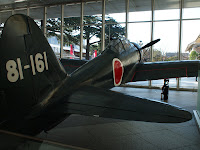 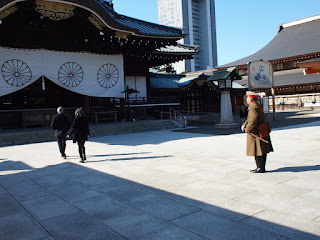