Scare For A Cure at Eeyore’s Birthday 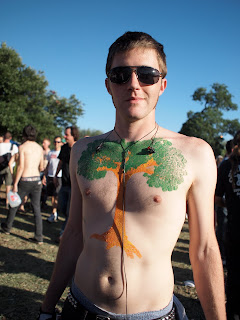 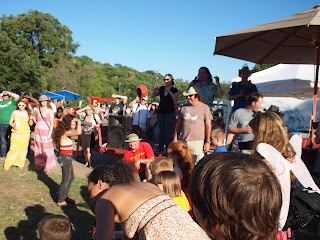 You may be aware that Austin’s annual hippie festival, Eeyore’s Birthday Party, was held in Pease Park this past April. You might know about the hordes of costumed revelers, some of whom attended the birthday party of a fictional donkey wearing mostly body paint and a smile. However, you may not know that the annual event put on by the “Friends of the Forest” is a fundraising opportunity for local non-profits.

In the last couple of years, I’ve become very aware of the fundraising aspect of Eeyore’s Birthday.

Back when I was a UT undergraduate, I’d walk to Eeyore’s from my dorm. I’d often spend all day in the drum circle, getting someone over 21 to buy me a beer, and coming home filthy, exhausted and very, very happy.

Yet, this year I went to Eeyore’s primarily to help sell sausage, even though I’ve been mostly vegetarian as long as I’ve been going to that party. The charity I’m heavily involved in, “Scare For A Cure” was selling sausages from “The Best Wurst” as a fundraising project.

Scare is led by Austin Police Department detective Jarrett Crippen. You might remember Crippen from when he won Season 2 of the Sci Fi Channel’s reality TV show “Who Wants To Be a Superhero?”
Scare’s primary fundraising event is putting on an elaborate haunted house each October, and then giving away the net proceeds to local cancer-related charities. Last year Scare donated $15,000 to the Breast Cancer Resource Centers of Texas, which provides services for women in Central Texas who’ve been diagnosed with Breast Cancer. I’m very proud that Scare does a lot of good work benefiting people in need.

Since Scare gives away the money we make from our haunted house, we’re always broke when it’s time to start building next year’s attraction. That’s why we were out serving up sausages at Eeyore’s.

Since this vegetarian can’t stand to be around the smell of cooking meat, I took a different approach to helping with the event. While Crippen and crew were serving and selling sausages, I was chatting-up the people waiting in our sausage line. Dressed in an Eeyore- appropriate outfit accessorized with a tiara, giant fake pearls, and enough glitter to decorate a pre-school art project, I foisted off flyers for our new haunted adventure, “H1Z1: Zombie Wasteland.”

I promised potential Scare guests that, if they came to see our haunted house they’d get to kill lots of zombies. (Note to Scare script committee, please add more zombie kills!). I managed to sweet-talk a photographer from The Daily Texan into coming out this fall. I talked someone into volunteering to write Scare press releases, and signed up several others to our mailing list. I sold the hell out of the concept of “Scare For a Cure.”

Since the sausage line included people who didn’t care about haunted houses, I strongly encouraged those people to support us by upsizing their order and buying two sausages!

I stood there chatting up potential customers until I developed a mild sunburn and was losing my voice. I only stopped when we ran out of bread and shuttered the sausage sales.

Sadly, by the time we’d closed down the sausage stand, my friends who’d come to relax at Eeyore’s had already left the park. It made me quite sad that I’d missed going to the Eeyore’s drum circle with my friends. Since the only non-Scare friends I saw at Eeyore’s were the ones who’d stopped by to purchase sausage, I felt like I’d missed my usual party!
At the end of Eeyore’s, I ended up getting a ride home from Detective Crippen. On the brief ride home, Crippen divulged that he’d forgotten the movies he was expected to show that evening to the Scare costume crew. I quickly detoured him through “I Luv Video” and rented him the movies, as he didn’t have a store account!

Sometimes I’m surprised by how much my life has changed since I’ve been going to Eeyore’s. Instead of hiding my underage beer from Austin’s finest, I’m renting movies for an absent-minded detective.
I’m just glad that this vegetarian could help out at Eeyore’s and still stay upwind of the cooking meat!