I Feel at Home in New York City…and Sometimes I Wonder Why!

A couple of weeks ago, I was lucky enough to flee a big snowstorm in Boston, and go spend some time in NYC.

When I was there I stayed with my cousin, her baby Hudson, and my Aunt Diane, whose flight had been delayed for a couple of days by the snowstorm.

Since the last time I visited, my cousin has moved to Brooklyn, a borough where I’ve never spent much time. Yet, it feels very much like home, as does the rest of NYC.

In a lot of ways, this makes little to no sense. After all, I only lived in NYC long enough to get mail there while I was doing a brief program at NYC in the early 90s. For years afterward, I was lucky enough to visit my former roommate Cora, and get to briefly drop into her NYC life. Hanging out with Cora and her modern dancer/Martha Graham School of Dance friends, I got a window into the city that I would have never gotten as a plain ole tourist.

But as for part where NYC feels like home, I can’t really explain it, expect to wonder if maybe it has something to do with television and movies.

While I was in the city in early February, I stumbled across the filming of a remake of the 80s movie Arthur, starring Russel Brand. The filming had closed down the front entrance of the Strand book store, (close to Union Square.)

I couldn’t help but wonder if all of the location filming that’s been done in NYC has sunk into my brain, making me feel at home just because of all the images that I’ve absorbed from the screen over the years. 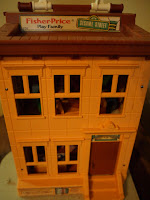 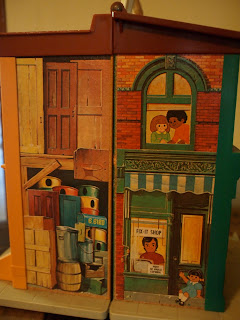 I spent some time contemplating this, until I came home to Austin. While sitting on the floor feeding my dog, I looked up at a favorite childhood toy that I had recently rescued from my mother’s garage. It was a plastic copy of a toy brownstone, made as a Sesame Street tie-in during the 70s. It’s kind of eerie how much the plastic toy looks like a real brownstone!

So does my strange at-homeness in NYC have something to do with mass media? Maybe.

Of course, NYC isn’t the only place where I feel at home. Paris is the place that feels the most like home, even though I don’t speak enough French to order food for myself. Both Tallinn, Estonia and Riga, Latvia feel like home in some ways, though I think it may be a combination of people and streetscape that’s responsible.

Yet, some places don’t feel like home, even though I’ve spent lots of time there.

I married a man who was born in Somerville–and I’ve spent what amounts to months (if not years) in greater Boston–but it doesn’t feel homey at all.

Asheville, where my family has lived for the past two hundred plus years, (and where various local tourist attractions are part of my family history) doesn’t especially feel like home either.

Who knows? Maybe it was watching so much Sesame Street in the 70’s  that’s responsible for my comfort level in NYC. 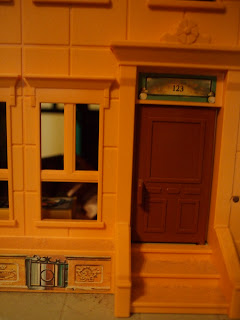 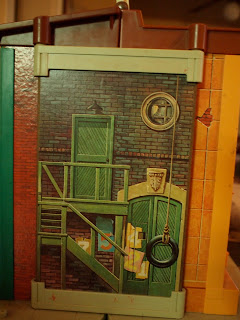