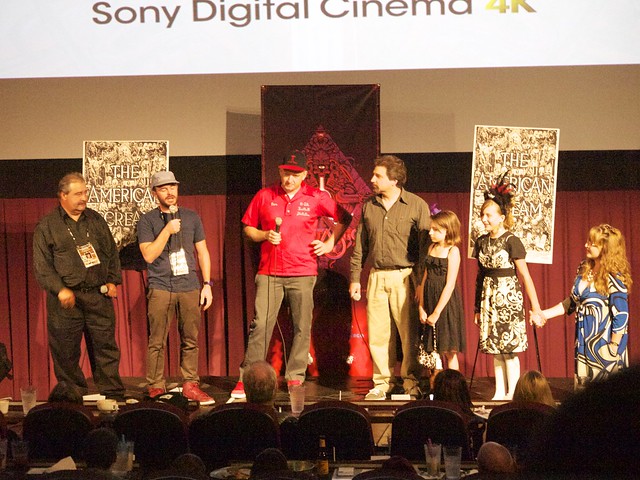 With the major craziness of the weekend of Fantastic Fest behind us, it’s time to look at what films you can–and should–still catch at the festival as of Tuesday afternoon.

The films are listed in the order of the effort that you should spend on getting to see them:

I should totally call these “Half-Dead Reviews.” They aren’t proper reviews, just a guide to where you should park yourself during the rest of the festival.

I Declare War: this low budget film with child actors is amazing. Well paced and tight, it feels far fresher than anything else at Fantastic Fest this year! See it now, as it doesn’t have distribution. Doubt you’ll see it on another big screen in America with the children swearing like they do.

Berberian Sound Studio: Sure, being released onto the Internet  in a couple of weeks, but trust me, if you are into eye candy and atmosphere you want to catch this one on the big screen. This beautifully shot film isn’t about the the plot, it’s about the creepy sounds and visuals. (If you are a fan of 70s Italian cinema, this should be at the top of your list.)

Tower Block: A great female lead in a British installment of “Trying to escape a crazed killer in a confined space” picture. Non-posh British accents are a plus!

Plan C: If you are into Dutch culture, catch this bad-cop movie. Well done, if a bit predictable.

New Kids Nitro: Sure, this grossout Dutch comedy is on the bottom of my list, but I can totally see why, if you like gross-out humor, it might be on the very top of your list. It’s also worth seeing because the actors/filmmakers are walking around Fantastic Fest…and it’s sort of fun to imagine them slipping into their characters at any moment.