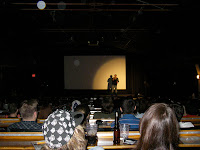 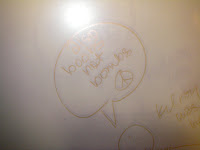 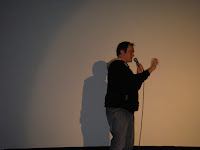 Dressed in jeans and a black hoodie– and clutching a beer– film director Quentin Tarantino paced in the spotlight of the small stage of the Alamo Drafthouse theater in downtown Austin, Texas. He told the mostly male crowd that when he was in 6th grade, his mother had gotten him a subscription to Playboy. His first gift issue featured a pictorial on Casanova & Company (1977) a Tony Curtis/Casanova/ mistaken identity flick. Later re-titled Sex on the Run, it recently served as the kickoff film for Quentin Tarantino presents Last Night at the Alamo Grindhouse (May 10,11,13)—a three night mini -festival of grindhouse triple bills—showcasing Tarantino’s personal vintage 35mm prints of the low-budget gems that once played America’s drive- in’s.

The festival was inspired by the relocation of the downtown Austin, Texas Alamo Drafthouse, a quaintly tattered beer and food-serving movie venue. The downtown location was the first incarnation of what’s now a successful small chain of theaters known for eclectic programming. Sex on the Run was followed with Sex with a Smile (1976) an omnibus film of several short sex stories. The night ended with The Oldest Profession (1967) with seven directors contributing shorts on prostitution through the ages. (Tarantino’s sex comedy prints also screened at the 2007 Los Angeles Grindhouse Festival as Euro Sex Comedies Triple Feature.)

One distinctive aspect of the Alamo QT events is that there’s no velvet rope. The illusion: you’re watching movies in someone’s living room. Patrons are asked to refrain from seeking autographs or shoving screenplays into Tarantino’s face, but you can walk up and chat.

“It’s been really casual this time,” said Tim League (co-founder of the Alamo Drafthouse with wife Karrie). How casual? I don’t think I’ll ever forget inviting myself into a conversation with Tarantino and Shauna Leveille, 34, the voluptuous dark-haired South by Southwest Film Festival theater manager, just as Tarantino enthusiastically re-created a line from Sex with a Smile’s Dracula Fantasy, before breaking into his distinctive staccato laugh. The best part? Making brief eye contact with a celebrity, while wearing the official film geek/film festival uniform of rumpled dark clothing, tattered jeans, and battered Converse. It wasn’t a high-stress, red-carpet, dress-up event.

“It’s like putting together a menu.” Tarantino told me about choosing what films to show for the event. “In addition to his other abilities, I respect his skills as a film programmer,” said Lars Nilsen, 35, an Alamo film programmer. Nilsen added that anyone who programs films has certain obsessions. “It’s great seeing a major filmmaker’s obsessions,” Nilsen said.

Tickets for the event were $75 for three nights.